Limerick District league finished off their Kennedy cup campaign with a superb win in the Kennedy Plate final on Saturday in U.L.

Limerick settled well into the game quickly and played against the wind in the first half. Limerick wingers were in flying form with both Aaron Cusack on the Left and Shane Finucane on the right wing were running at the Wexford full backs and both had great opportunities to score early on in the half. Limerick missed a fantastic opportunity to take the lead when they had a free header from a corner that flashed wide of the goal. Diego Galero was keeping both of the Wexford center halves on their toes as he was  finding the space to link up with Jayden O’Donovan on several occasions. Our midfield of Lee Maguire, Sean Costelloe and Jayden O’ Donovan were on top and started to control the game with some super passing play that got the ball out wide early to our wingers. Wexford’s goalkeeper made two great saves late in the first half. Limericks back four of Shane Dolan Jamie Mitchell Jake Houlihan and Etan Joyce give nothing away at the back and goalkeeper Ethan Barry easily dealing with anything that game his way.  The first half finished with the Limerick team well on top but the game was still level with no score.

With the wind at our backs Limerick pushed on early in the second half and with some quality play in the middle of the field limerick got Aaron Cusack on the ball out wide and he cut into the box and finished with a great shot to open the score for a delighted large limerick support. Wexford now started to respond with them pushing on and started to find a few openings but the limerick keeper was on top form and saved well at his near post when the Wexford centre forward had a powerful shot from a tight angle. Limerick introduced Ruari Mullins for Diego Galero who had picked up a knock earlier in the game and straight away the fresh legs of Mullins started to cause problems for the Wexford back four. With Wexford pushing on looking for the equalizer and more space opening up for the  limerick midfield  Sean Costelloe picked up the ball from Jayden O’Donovan and he ran at the Wexford defence and powered an unstoppable shot that gave the Wexford Goalkeeper no hope of saving it. Limerick pushed up and with the Wexford Goalkeeper kicking long Reece Barry now came on in the middle of the field for Lee Maguire and the hard working Reece Barry got on the ball and settled well winning the kick out with some super headers that pushed Wexford back into their own half.

With Wexford driving forward  Aaron Kelly came on at right full and Jamie Faulker at left for Limerick and they played their part in keeping the Wexford front line at bay. With Wexford putting in some long balls from frees Jamie Mitchell and Jake Houlihan dealt with everything. Limerick now replaced their Goal Keeper and Ciaran Howard came on for Ethan barry. Limerick continued to break at pace and Ruiri Mullins was very unlucky not to score as he was ruled out for offside the same player again was denied minutes later by the very impressive Wexford goalkeeper. With the final whistle there was great excitement from the Limerick  players and coaches and the large limerick support.  It was a great ending to a fantastic Kennedy Cup competition for this highly talented limerick Squad.

The Limerick Captain Jamie Mitchell was presented with the Kennedy Plate and the party began .

The players names and clubs 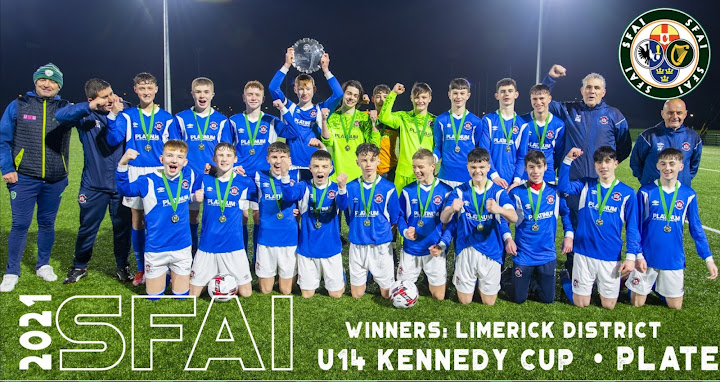